I recorded my first album in high school. At least I called it an “album.”

This was my first foray into recording. If you’re wondering, I shan’t be re-releasing that album. Whew, it was awful.

However, I learned a lot of things back then. I had no idea I was using sub-par equipment, and I worked really hard to make the recordings sound good. Most of all, I had fun.

Perhaps you’re in the same place. You’re having fun writing songs and perhaps even recording a little bit. The fact that you’re reading this series of articles shows that you’re wanting to step things up a bit.

If you’re like me, the majority of your plans for recording involve one microphone. You’ll record the acoustic guitar first, then vocals, then some additional parts.

To do this, you’ll probably want to get a good large-diaphragm condenser microphone.

There are basically two types of microphones – dynamic mics and condenser mics. Dynamics are usually used primarily in a live sound setting. In the studio, they’re often used to record drums and guitar amps. (I’m speaking in very general terms, since there are no hard and fast rules. In fact, you should check out a great shoot-out I did between the Shure SM7B and SM58. Both are dynamic mics. A dynamic mic can sometimes sound FANTASTIC on vocals.)

Condensers are more sensitive than dynamic microphones, so they tend to pick up more detail. There are large-diaphragm and small-diaphragm condenser mics. Small-diaphragm mics are great for recording various instruments or drum overheads. They usually don’t work well for vocals (in my experience).

I know, I know. It seems like such a “salesman” type of question, but it’s a really important question to ask yourself when dealing with microphones.

For me the breaking point is around $250. If you spend less than that, you’ll most likely need to buy a new mic in a year or so. If you can swing $300 for a microphone, you’ll be happy. I’m a big fan of Rode microphones for anyone who wants good quality but doesn’t want to spend a ton of money.

Now if you’ve got a big chunk of cash laid aside for your dream studio, then you can seriously consider some of the higher-end microphones out there. Brands like Neumann, Blue, and AKG come to mind.

Why do big studios have mic lockers full of microphones? Because no one microphone works well in every situation. It’s like painting. If you give a painter one or two colors to work with, they’ll only be able to create a handful of paintings.

In the same way, microphones can add a lot of color and character to your recordings. One mic that sounds great on my vocals may sound awful on another guy’s voice. If you’re aiming for a professional studio, you’ll need to eventually look into investing in several microphones. That way you can cover whatever situations you come across during a recording session.

BUT PLEASE REMEMBER… a great microphone won’t guarantee a great recording. You still need to do the hard work of getting it right at the source.

What Do I Use?

As I update this article (in July 2013), my two favorite mics right now are the Earthworks SR25 (small diaphragm condenser) and the Shure SM7B (dynamic): 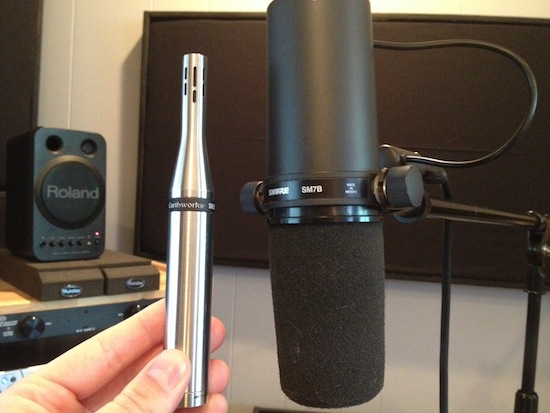 What you choose is certainly up to you. Learn how to get the best sound you can out of the gear you own, and upgrade when you can.