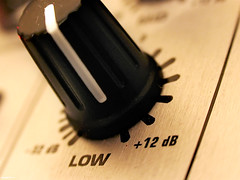 It’s been said that the low end of your mix is “what separates the men from the boys.” But it can be really hard to get right, right?

Every mix poses its own unique challenges, and I never mix two songs the same way. However, here are 6 tips for getting a handle on the low end in your mix. Some of these may seem odd or strange. Give ’em a shot. They seem to work for me.

1. Mix Before You Record

Wait a second…mix before you record? That’s just silly. Well, hear me out.

Whenever somebody sends me a question about the low end in their mixes, their focus is almost 100% on mixing. There’s this subtle underlying assumption — that the source shouldn’t matter, that the real tone in a mix comes from mixing.

For example, I’m working on a song right now that is sounding amazing. Drums, bass, acoustic guitar, electric guitars, percussion. All of it has been recorded and doesn’t have a single plugin on it…and yet it sounds incredible. What happened?

I mixed before I recorded.

It’s not simply “getting it right at the source.” It’s a bit more than that. It’s making the recorded signal sound like you want it to sound in the mix. Who cares if you can get a huge acoustic guitar sound if it really needs to be fairly thin and bright in the mix? Exactly.

Try mixing before you record. While you’re setting up mics and getting levels, focus on capturing the sound you want for that song. Every time I make an effort to make the recorded tracks sound really close to how I want them to sound in the mix, I have so much more fun mixing. Not only that, my mixes turn out better.

Yes, there are plenty of things to to in the mixing phase, but don’t assume that good mixes happen during mixes. They started long before that.

Don’t you just love the sound of 40 Hz? Yeah, me neither. And chances are your mixes doesn’t need information THAT low. Some genres call for it, but most of us don’t need that much sub bass.

I’ve recently started putting a HPF on my bass and kick drum tracks, rolling off everything below 40 Hz or so. And? Suddenly the bass feels bigger and has more punch and thump. Hmm…Getting rid of the unnecessary bass seems to make the bass sound better. Very interesting.

Chances are you’re going to compress your kick drum and bass guitar. I do, almost every time. But how much compression you use is only a part of the equation. The attack time of that compressor makes an immense difference in the sound of the bass.

If you’re in the habit of always adjusting the threshold, ratio, and output gain knobs, but you never touch the attack knob, you’re hurting yourself. Raising the attack can allow that bass to really thump. Turning down the attack can really help emphasize the “click” on the kick drum.

Finding that sweet spot with attack will improve your low end by leaps and bounds.

4. Play With Faders Before EQ Knobs

Of course you need to use EQ on your bass and kick drum tracks. Carve out some low mids, let those bass frequencies shine through. But before you get all slap-happy with EQ, make sure you’ve spent some time with the faders.

I can’t tell you how many times I’ve spent 10 minutes wrestling with a bass track, trying a bunch of different EQ and compression tricks, only to realize that turning it down in the mix by 3 dB fixed all the problems I was having.

Having the right balance between your kick and bass can get you much closer to the sound you want, long before your reach for that EQ.

5. Figure out Who’s the Man

There really can only be one boss down below 150 Hz. Who’s the man in the mix? Who’s holding down the low end? Is it kick? Is it the bass? Is it some other instrument?

Figure that out, then make the other one “work around” the man.

In other words, if the kick drum really has the bass sound that you want, then EQ the bass guitar to “sit” nicely alongside the kick. This may mean that you remove some more bass frequencies from the bass to make sure the kick sounds great. That’s okay.

It can work the other way, too. Sometimes the kick drum doesn’t sound super deep. It may be rocking around 120 Hz, but there’s not much information down below that. In that instance, maybe the bass guitar should be the man, holding down the low end, and you shape the kick drum around that.

It’s all about compromise.

Your monitoring level can make or break the low end in your mix. If you went to school for recording, you probably learned about the Fletcher-Munson Curves. It’s a pretty dorky topic, and it doesn’t really matter if you understand it. But what you need to know is this:

Bass frequencies behave differently at different volumes. The louder you listen to music, the more bass it seems to have. Think about it. When you crank up your studio monitors, you can hear a nice, big bass sound, right? What happens when you turn ’em down really low? You only hear the high-frequency stuff. The bass frequencies mostly disappear.

I was listening to a CD the other day. It was really good music, but the bass was simply too loud, consistently loud throughout the entire CD. When I turned it down to a nice, low volume, the bass was STILL loud. The bass balance at low volumes was pretty good, but at normal listening volumes it was overwhelming.

You can do it.

You can get great-sounding recordings and mixing from a home studio. It just takes a lot of work, a lot of practice. Got any bass tips for the rest of us? Questions? Leave a comment below.