Does mixing drums intimidate you a little bit?

Yeah, me too sometimes.

The trick to being confident with mixing drums (or any instrument for that matter) is two-fold.

First, you gotta spend a lot of time doing it. There’s no shortcut around it. The more you mix, the better you get.

The second part is equally important. You need to be constantly trying new things, especially if you’re just starting out.

Just yesterday I was emailing a guy who’s been a recording engineer for three decades, and he told me he is STILL always trying to learn new things. So cool.

But I do have a series of different approaches that I try, depending on the song.

For example, I used a pretty unique approach to mix the drums on my latest album. I took traditional drum mixing and flipped it upside down, and the results are pretty cool.

It was all centered around getting a great sound at the drum bus BEFORE processing the individual pieces of the kit, and it involved some fun routing tricks.

I divided covered the process in seven bite-size videos and stuck ‘em in my VIP members area.

You can check out all seven right now by joining here:

Here’s what three VIP members had to say about the video series: 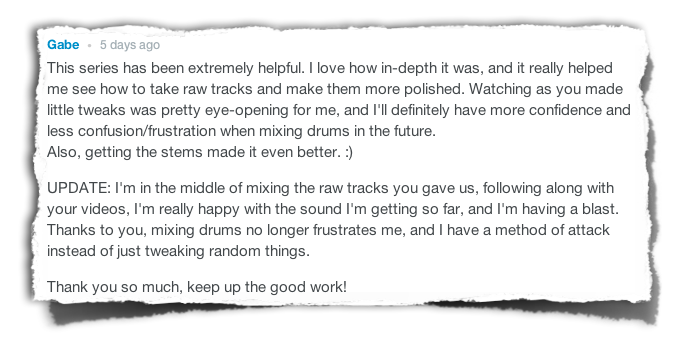