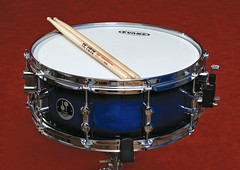 One of the things I love most about recording music is that there are no rules. One guy decides to use a cardboard box as his kick drum sound…and it sounds awesome. Another guy decides to sample in the sound of a screaming cat and blend it with the cymbals. (Okay, I’ve never seen that, but I bet it’s awesome.)

You’re free to do whatever you want. Maybe that’s why so many people record music as a hobby. They spend 40 hours a week being told what they can and can’t do, but in the studio they can do whatever they want. The only real rule is that it needs to sound good. Ah, recording…

But there is one “rule” I almost always follow when mixing drums…and it almost always works. So, of course, I want to share it with you.

I’ve heard it over and over again from mix engineers. Drums sounding boxy? Missing that definition you need? Cut 400 Hz.

It’s hard to explain. You just need to go try it, but it’s especially effective on kick drum and toms. Grab an EQ, do a cut at 400 Hz and nothing else. Then compare the different sounds. What I hear is that the low end becomes more pronounced and has more punch. I can also hear the high-end detail much more clearly?

This is all without boosting the lows or the highs. That’s why I always suggest that you cut before you boost. Emphasize one frequency range by DE-emphasizing another one. It’s kinda like budgeting:

You’ve got a set budget for the month.

You’ve got a set number of frequencies to work with.

You decide you want to spend an extra $200 on a piece of gear.

You decide you need more low end in your kick drum.

You take $200 out of ANOTHER part of the budget to pay for the gear.

This doesn’t ALWAYS works, but you’d be surprised how much a simple cut can work better than a boost.

Hear it for Yourself

Here’s a kick drum track, dry without any EQ:

I did a fairly exaggerated cut to make it easier to hear. Even so, it’s not a super obvious change in sound. What I hear is that suddenly the low end beefyness of the kick is much more prominent than before. It sounds like I boosted the lows, but I actually just did a single cut to the low-mids. Funny how that works.

Side-note: Obviously 400 Hz might not be the EXACT frequency you need to cut, but it’s a great starting point.

And if you want to learn my process for effectively EQ-ing anything, plus a killer ear-training technique, check out Understanding EQ: