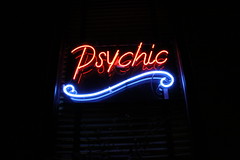 I recently finished up a few mixing projects, one of which was for my good buddy Kevin Blaine. (Check out his album Reasons to Try Again, mixed and mastered by me. Great tunes.)

Anyway, as I was working on the final tweaks on these projects, something struck me. When a client sends over a bunch of tracks to mix, it’s essentially my job to be a mind-reader. In other words, I need to take what I’m hearing in the tracks and turn it into what the client is hearing in his/her head.

Mixerman explains this really well in Zen and the Art of Mixing (affiliate link). He discusses in depth the process of really listening to the tracks and letting them guide your mix decisions. In essence, you should have everything you need to mix the song, simply based on the tracks that were sent to you.

When you’re doing the first round of mixing on a project, follow Mixerman’s advice. Listen to the music and determine what actions you need to take to get the tracks where they need to be. I the producer has done his/her job well, you should have everything you need.

Don’t bring any pre-conceived notions about how you think things should go. Try to use your instincts more than your brain. If you over-think things, it’ll end up sounding like you over-thought things. 🙂

In his book, Mixerman emphasizes working quickly and decisively. I love that idea. Rather than constantly going back and undo-ing things, make a decision, commit to it, and move on. If you get the drums sounding like you want them to, then 4 hours later, after building a mix around those drums, you want to go back and change the tone completely, you’re going to “break” your mix.

As hard as it can be. Make your decisions, then move on.

As much as I love the first round of mixing, I think I might like the second round even better. For me, round two starts when I send the mixes off to the client to get feedback.

Since I’m no Mixerman, usually my mixes need a few tweaks before the client is happy…and honestly I really enjoy it. I’ll send a mix over to the artist, then he’ll come back with some really helpful suggestions and things he’d like to see happen.

Usually it’s not a ton of tonal changes. Mostly it’s level stuff like “I’d love the lead vocal to be a bit louder” or “The snare drum is a bit loud.” Now, you may be saying to yourself that this must mean I screwed up on the lead vocal and snare drum levels. I say it’s subjective.

I set the levels where I would like them, then I defer to the client. If they’d like a louder vocal, that’s what I give them.

What makes round 2 fun is that I get to see how well (or how poorly) I was able to read the client’s mind. Usually I’m pretty close. They write me back and say, “This is exactly what I’m wanting!!! Just a couple minor changes…”

One song comes to mind. I was mixing an album produced by the über-talented Brooke Waggoner. After the round 1 mix, she came back asking for the background vocals to be louder. I bumped ’em up a little. She asked for them to still be louder.

As it turns out, she was wanting the background vocal (“oohs” and “aahs”) to be almost as loud as the lead vocal itself. Rather than being supportive, they were supposed to be up front and center, demanding attention. That’s a perfect example of my mind-reading not working well. I just assumed the BGV’s should be treated like pad instruments, which is normally how I mix them.

After talking with Brooke, I finally “caught” her vision, and a few tweaks later she was thrilled with the mix.

See? I had to get inside her head. My first mix wasn’t necessarily “wrong,” but it was wrong for the client.

What do you think? Do you enjoy the mix/revision process? Are you working on projects for someone OTHER than yourself? I highly recommend it.

If you want access to the multi-track files from my album Out of Indiana and video tutorials on how I mixed each song, check out Mix With Us. It’s a fun community of mix-a-holics. 🙂