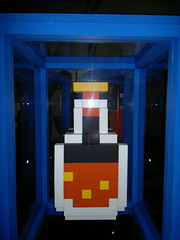 Do you hear somebody like me or Graham say how important it is to “get it right at the source” and wonder how you do that? People will email me, saying they don’t even know what a good recording is supposed to sound like.

It’s a valid concern, and the good news is it’s all subjective. What sounds like a great kick drum to me may sound muddy to you. What you think is a killer mix may strike me as boring or lifeless.

Okay, Joe, that doesn’t help us know how to get great recordings. I’m getting to that. 🙂

Go to the Eye Doctor

If you’ve ever been to the eye doctor, you know they make you look through a series of lenses before they determine your exact prescription. They ask, “Better one? …or two?” and you choose between the two lenses and tell them which one looks clearer.

They then offer you two more choices…and two more…and two more, until it’s perfectly clear to them exactly which eye prescription you need.

Imagine if you walked into the eye doctor, and they slapped a set of glasses on you and asked, “Can you see?” You slowly answer, “Yeeeeesss?” And they say, “Great! Thanks for the business!” They take your money and push you out the door.

How would you know if you got the right glasses? Sure, you can see out of them, but that doesn’t mean you can see well.

It’s all about Comparisons

It’s the same way with recording. If you place a microphone on a guitar amp and assume it’s right, you’ll never be very happy with your recordings. Why? Because you never compared it to something else. How do you know if what you’re doing is the best, if you’ve never compared it to another way of doing it?

If you ask me the best way to mic a guitar cabinet, I would tell you to grab a mic, stick it in front of it, and see what it sounds like. Then move the mic, and compare the two. Which do you like better? The first one may have sounded fine, but the second might sound SO MUCH better. You’d never know if you didn’t try…and it only took you an extra minute or two.

Here’s my formula for getting great recordings. Always have two options. No matter what the session is, always try it at least two different ways. That’s how you learn. That’s how you get better.

I don’t recommend doing this more than twice on a given session. For me it might look something like this:

This lets the singer warm up, it lets me try out two mics and two different placements, all within a matter of 15 minutes TOPS.

The end result? I’m making informed decisions about the recording. I’m not arbitrarily putting a mic in front of a source and hoping it’s okay. I’m trying different things and making decisions BASED…ON…WHAT…I…HEAR.

I don’t magically know where to put the mics…I use my knowledge of how audio works to make an educated guess, but then I just have to put the mic in front of something and listen to how it sounds. Then I make changes from there.

That can be a very odd approach if you’ve never done it…but if you want to take control of your recordings rather than have them control you, you’ve gotta start implementing a process like this.

What do you think? I wanna know. Leave a comment below.